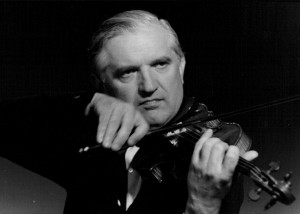 Tibor Varga is considered as one of the greatest musicians of the 20th century. Eminent violinist, soloist, conductor and creator of a new style of violin playing, he has marked the cultural history of his time.

His repertoire as a soloist, conductor and interpreter of chamber music comprises some 1000 different compositions, among others

Numerous works were interpreted by Tibor Varga both as a soloist and as a conductor, also simultaneously, e. g. the Violin Concertos by Beethoven, Mendelssohn, Mozart, Paganini etc.

As a soloist, Varga played under the baton of the most renowned conductors, such as Ansermet, Bernstein, Böhm, Boulez, Ferrara, Fricsay, Furtwängler, Markevitch, de Sabata, Solti …

He recorded the great works of classic and contemporary composers for EMI, Columbia, Deutsche Grammophon and other distinguished labels, with such renowned orchestras as the Philharmonia Orchestra London and the Berlin Philharmonic.

Tibor Varga’s performances and recordings of the Violin Concertos and other works of Beethoven, Brahms, Nielsen, Tchaikovsky etc. are recognized as definitive interpretations and have become major reference points for future interpreters. His Bach and Mozart are a model of style, strength and self assurance.

Famous for his sublime interpretations of the classical repertoire, since the 1940s Tibor Varga has moreover been considered as a pivotal figure in 20th century music. Through his interpretations, he raised the Violin Concertos and other works of Bartók, Berg and Schönberg to the status of »classics« of the repertoire, assuring them a prime position in musical life.

He gave the Vienna première of the Berg Violin Concerto under Hermann Scherchen, and later gave the First performance of this work in Australia.

At the Royal Albert Hall, London, where he was regularly the guest artist at the Promenade Concerts, he played the Violin Concertos by Berg, Brahms, Schoenberg, Shostakovich and Tchaikovsky to the enthusiastic acclaim of audiences and the warm praises of critics.

Tibor Varga’s great interpretation of the Violin Concerto of Arnold Schoenberg at its 1949 German première has become legendary. Schoenberg, after hearing Tibor Varga’s recording of this work, wrote a letter – an historic accolade paying tribute to his talent and thanking him for the “superb interpretation” of his work. The composer wrote the following to him:

“Your performance resonates as if you had known the work for 25 years. Your whole interpretation is mature, expressive, marvellous. I can assure you that I have never heard a performance which so precisely reflected my intentions in every detail. I would like to be younger to write more music for you.”

Tibor Varga was the soloist of numerous World Premières, among them works composed for him and/or dedicated to him, such as the Violin Concertos by Blacher, Krenek, Nyström, Prado, Seiber, Zillig…

Following the advice of his close friend Franco Ferrara, one of the most highly regarded conductors of the 20th century, in the early 1950s Tibor Varga began conducting professionally and developed an equally outstanding reputation in this musical discipline. In 1954, he founded the Tibor Varga Chamber Orchestra (1954–1988), the repertoire covering more than 500 different works, from the Baroque (Bach, Corelli, Händel, Vivaldi…) up to the 20th century (Bartók, Krenek, Schönberg, Shostakovitch …). In the 1960s, he created a symphony orchestra, the Tibor Varga Festival Orchestra (1964–2001) in order to perform the main symphonic repertoire (symphonies, concertos). After 1988, the Orchestre de l’Académie Tibor Varga (1989–2002), a full-season chamber orchestra, adopted the role of the former Tibor Varga Chamber Orchestra.

In addition, Tibor Varga was regularly invited to conduct orchestras of international renown.

As a soloist, conductor and interpreter of chamber music, Tibor Varga performed about 1000 different works, among them the main works of the violin repertoire, including some 300 violin concertos.

This website uses cookies to improve your experience while you navigate through the website. Out of these cookies, the cookies that are categorized as necessary are stored on your browser as they are essential for the working of basic functionalities of the website. We also use third-party cookies that help us analyze and understand how you use this website. These cookies will be stored in your browser only with your consent. You also have the option to opt-out of these cookies. But opting out of some of these cookies may have an effect on your browsing experience.
Necessary Always Enabled
Necessary cookies are absolutely essential for the website to function properly. This category only includes cookies that ensures basic functionalities and security features of the website. These cookies do not store any personal information.
Non-necessary
Any cookies that may not be particularly necessary for the website to function and is used specifically to collect user personal data via analytics, ads, other embedded contents are termed as non-necessary cookies. It is mandatory to procure user consent prior to running these cookies on your website.
SAVE & ACCEPT